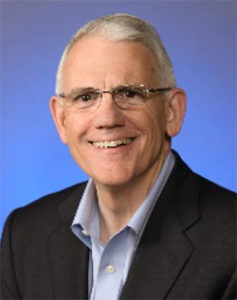 His education includes a B.S. in Chemistry from Baylor University, graduating cum laude (1970), followed by a M.S. in Chemistry from Baylor (1971).  While serving in the USAF, he received his Medical Degree from Louisiana State University School of Medicine in Shreveport graduating with honors (1978). Postgraduate medical training at Wilford Hall USAF Medical Center in San Antonio included an internal medicine residency (1978-81) followed by five years practicing Internal Medicine. He then completed his gastroenterology fellowship (1986-88).  In 2001, he earned a Master of Science in Medical Management from the University of Texas Dallas Business School and UT Southwestern Medical School. He served as Medical Director of the Fort Worth Endoscopy Center and the SW Fort Worth Endoscopy Center from 1995-2012. He is also a member of the Physician Advisory Board for Surgical Care Affiliates, corporate partner for the ambulatory endoscopy centers. In 2014, he was appointed to the Ambulatory Surgery Center Association (ASCA) Board and the ABIM Gastroenterology Subspecialty Board (Term completed 2016.)

Tom is a Fellow of the American Society for Gastrointestinal Endoscopy (ASGE) and American College of Gastroenterology (ACG).  He has served in leadership positions with ASGE as committee chair, board member, treasurer, and as president May 2012-13. From 2008-2012 he served on the Advisory Board for the GI Quality Improvement Coalition (GIQuIC), the first gastroenterology quality registry established in 2008. From 1996-2001 he served as President of Texas GI, an IPA that managed gastroenterology carve-out capitated contracts. He was President of North Texas Specialty Physicians (NTSP) from 2002-2008 and has served on NTSP’s physician board 1998-2013. NTSP is an independent practice association (IPA) that has successfully managed the following innovations:

Having served as Chief Medical Officer for Sandlot Solutions and President of CNC, and currently as NTSP VP of Physician Development, Tom is an outspoken advocate for improving patient care through health information technology which provides point of care clinical information and more effective care coordination. He is a frequent speaker at national meetings and has published articles on improving care quality, health information technology, and achieving efficient, high-quality care.